‘Twas the night before December 1 and all through the salon
Not a salon owner was stirring, for everyone was gone.
The bottles were sitting on the shelf with care,
In hopes that a stylist would soon be there.

The first visitor is here, but it’s not who you expect,
Bumble arrived in a flash, with a stocking to be decked.
As he hung up his stocking at the front of the room,
Libby prepared for the month was in full bloom 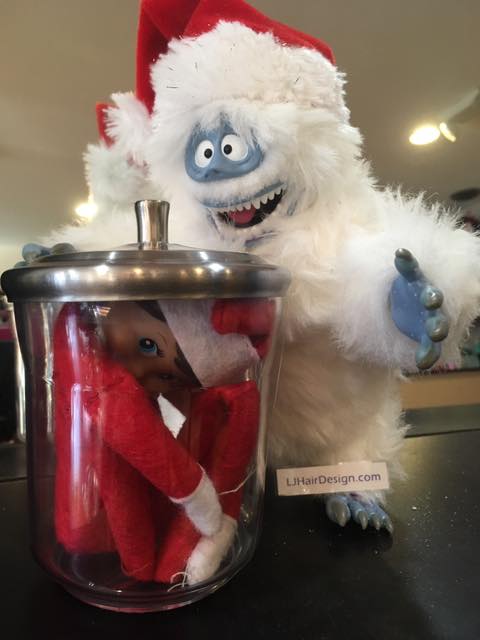 Someone is missing. Where could the little elf be?
Philamina isn’t here full of mischief and glee.
But look all around, for she could be before your eyes
Because Bumble snatched her up and hid his sweet prize. 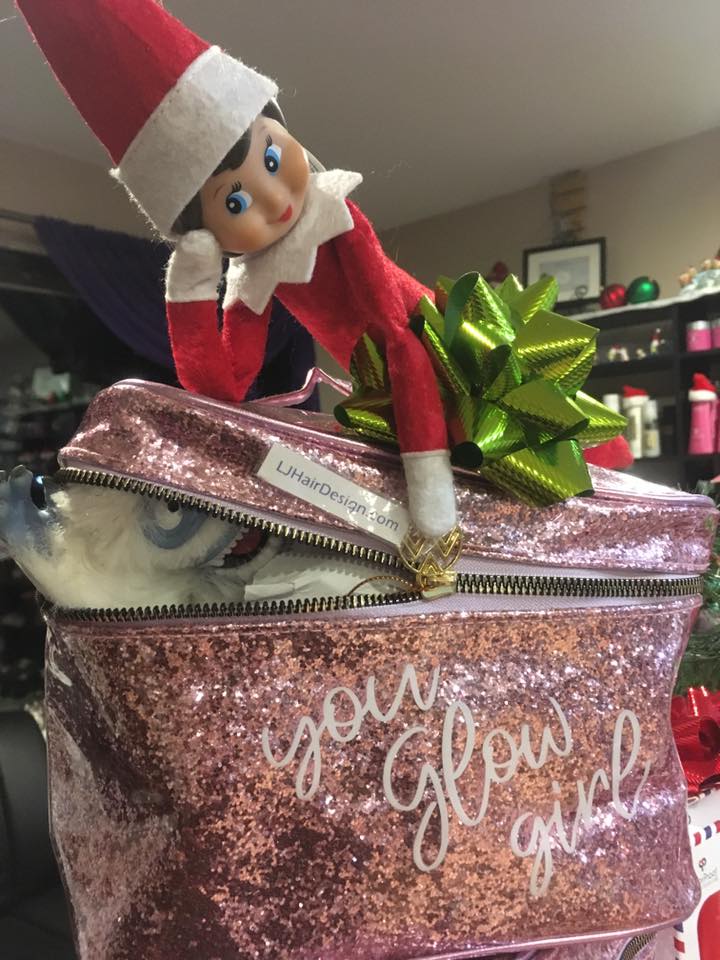 Here she is! She’s arrived! The elf zoomed into the place.
But it was not yet the time to embrace.
The two already in trouble, though the month just began,
Philamina captured Bumble, ready to start her grand plan. 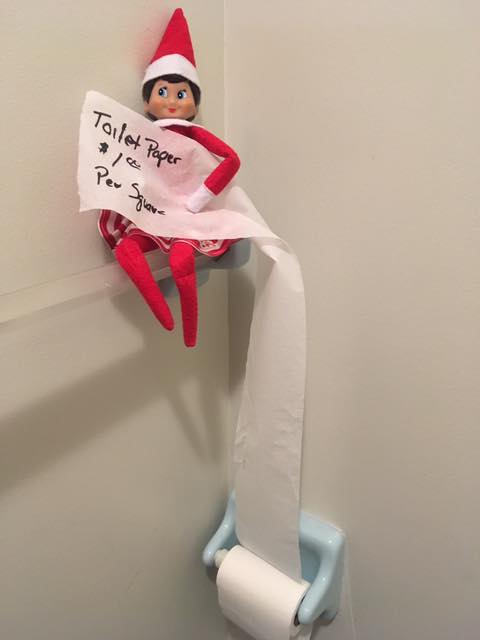 Starting off: Make a profit for a dollar a square,
Libby rushed into the bathroom as the elf made her fare.
Philamina caught a poor sap in a heap of trouble,
And gave the salon owner her half on the double. 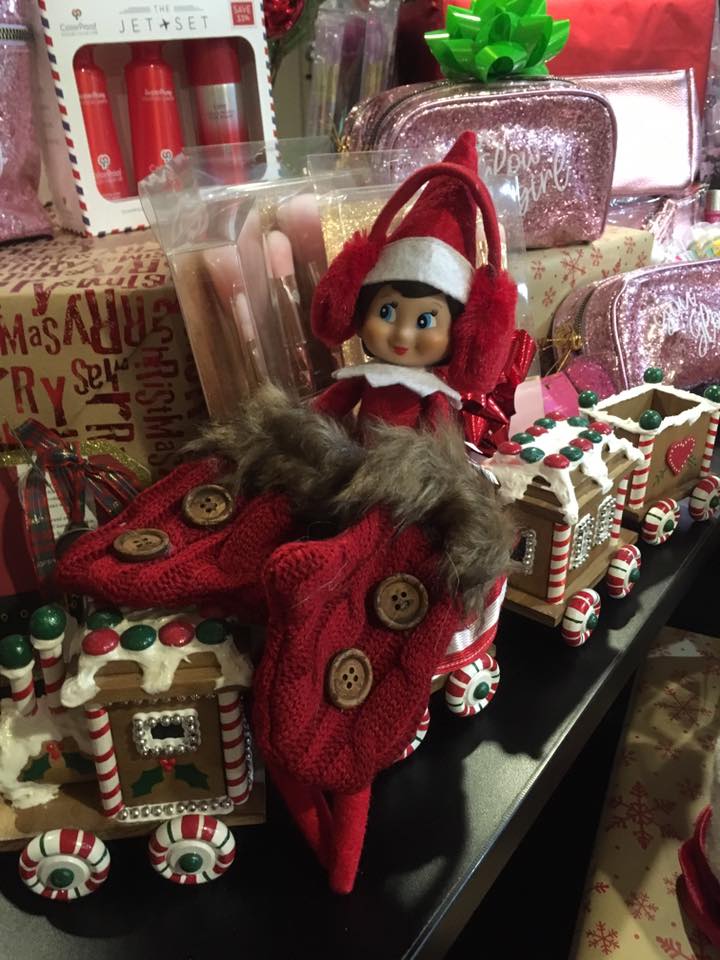 Out and about, with snow on the way,
Philamina knew to bundle up, for snow it just may.
With earmuffs, mittens, and a heart full of pride,
The elf began to sing “Baby, it’s cold outside!” 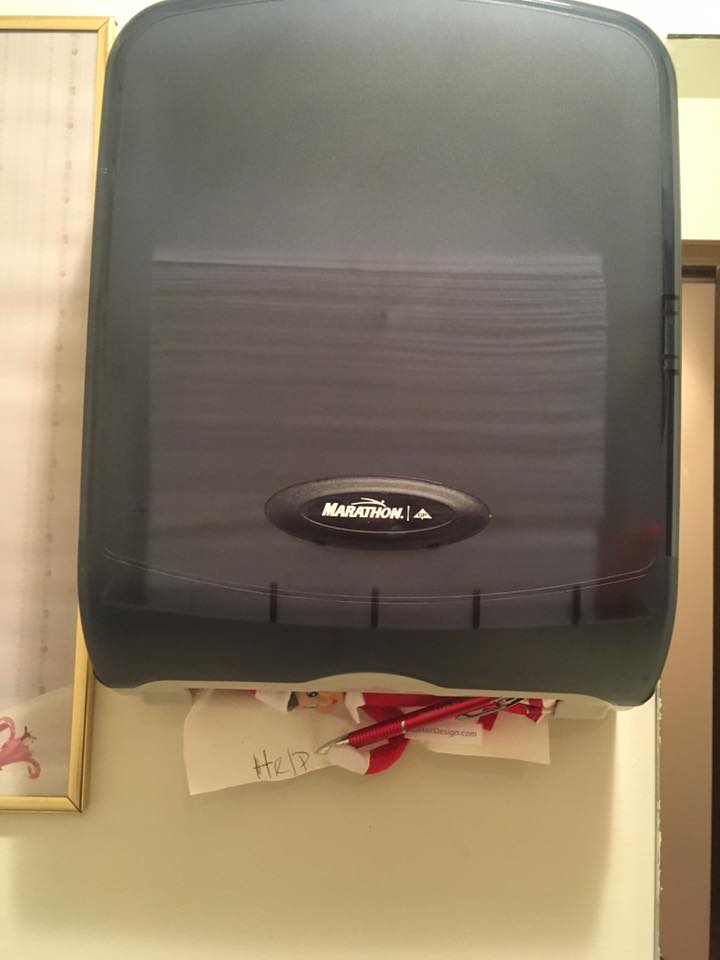 The weekend was over, but there was a slight mishap,
While inspecting the bathroom, the elf was caught in a trap.
“Help! Help!” she cried, with no one around.
Stuck in the dispenser was how she was found. 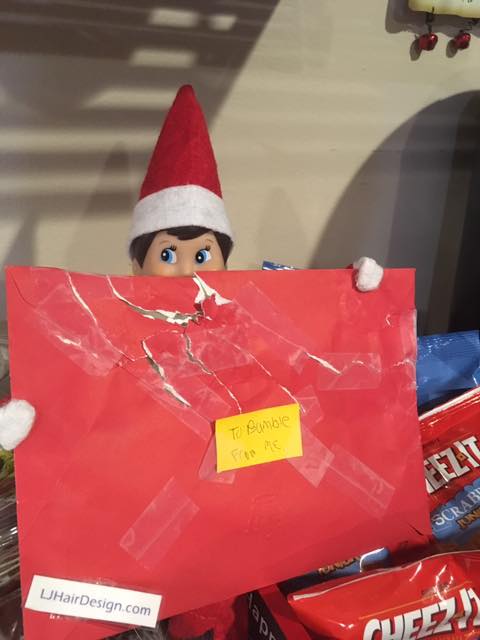 The end of the year. Time to turn a new leaf,
A letter to Bumble, meaningful and brief.
As the day passed, the card became wrinkled and battered,
But Philamina knew it’s the thought that mattered. 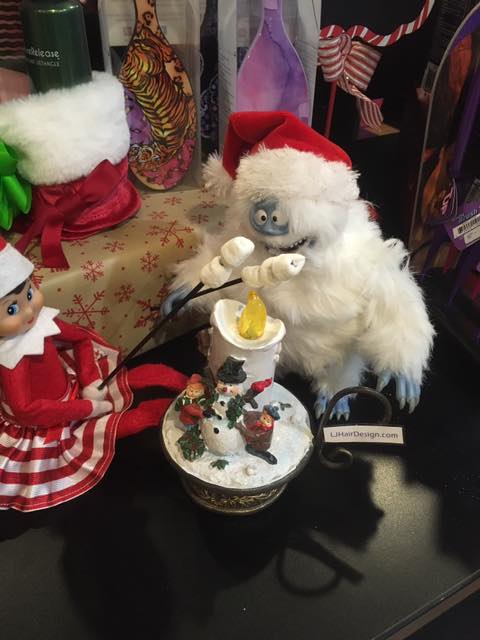 A fire and smores! Things are about to get toasty,
Two friends unite with tales oh so ghostly.
But the boss said “No fire in the salon!”
So a fake candle the smores will roast upon. 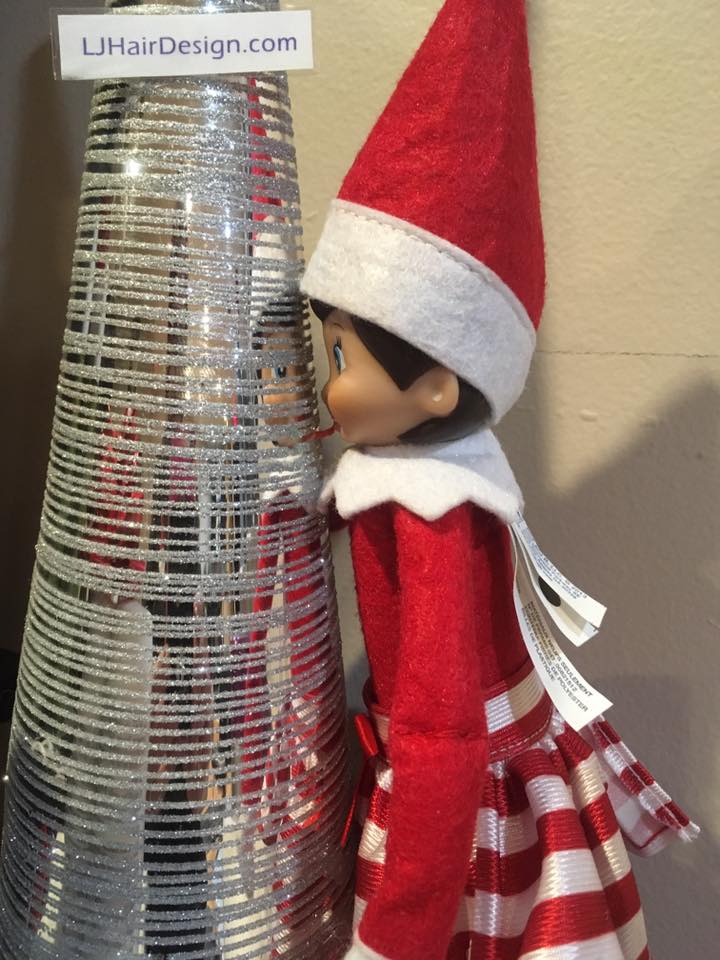 Opps! What happened? It was all going so well!
A double dog dare could not be quelled!
With her tongue on the ice, Philamina was glued,
For Bumbles challenge turned out oh so rude. 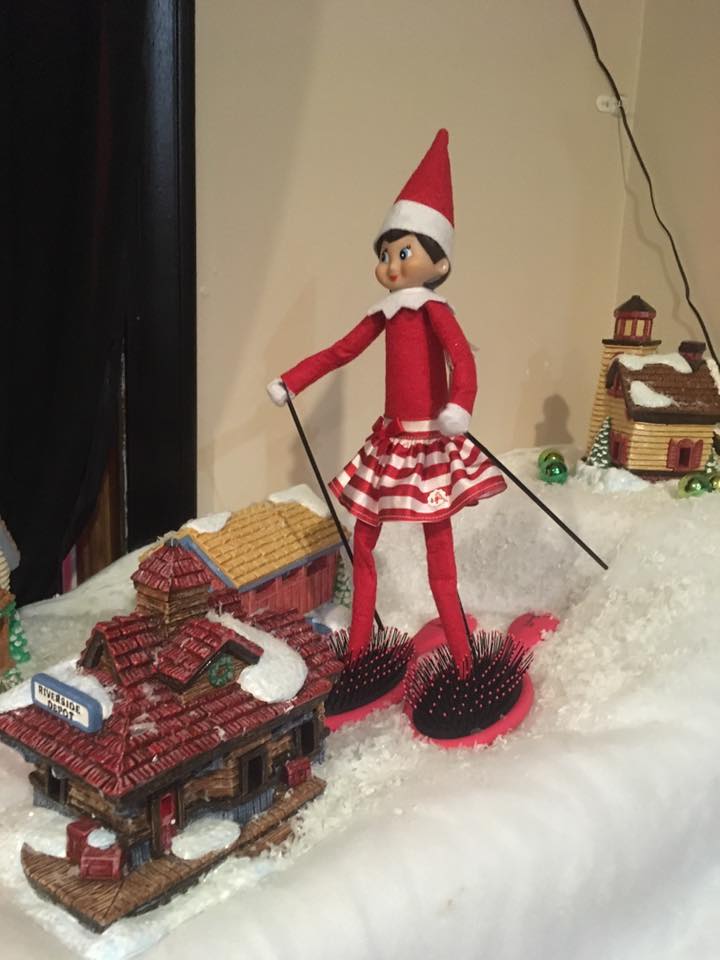 A day for skiing! But where is the snow!
“I’ll do it myself!” said the elf on the go!
Brushes on her feet and sticks in her hand,
Philamina zoomed about in a winter wonderland. 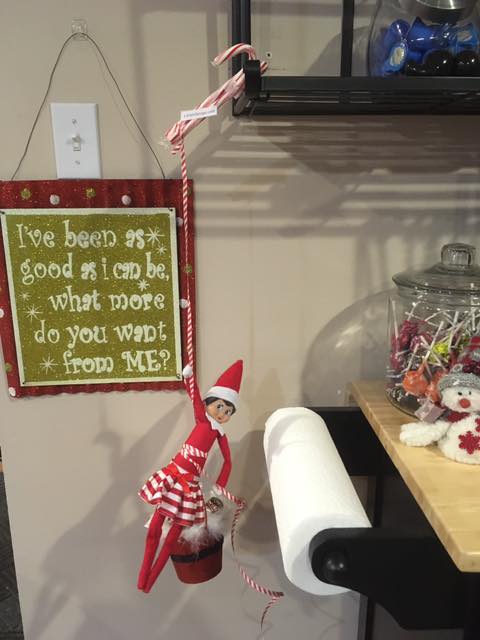 The need for adventure was ever so tempting,
To gather the candy was what she was attempting.
“A grappling hook! How perfect! I’ll climb up the cart!”
Said the elf to herself as she started to depart. 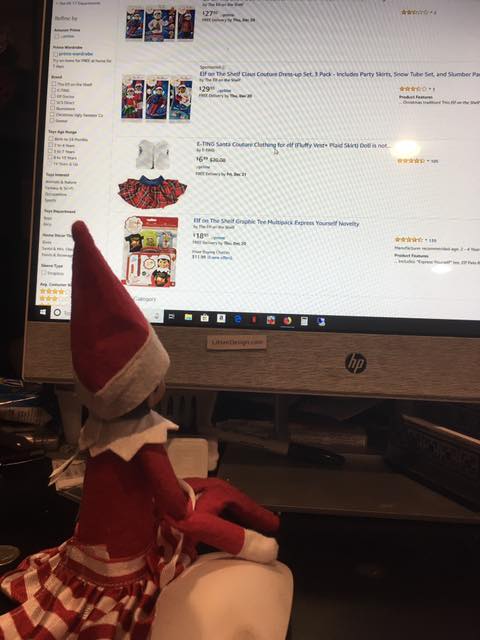 The deals! The coupons! It was time to shop!
Philamina longed for new treats with money to drop.
No, she’s not rich. She found Libby off her guard,
The elf snuck in her purse and stole her credit card. 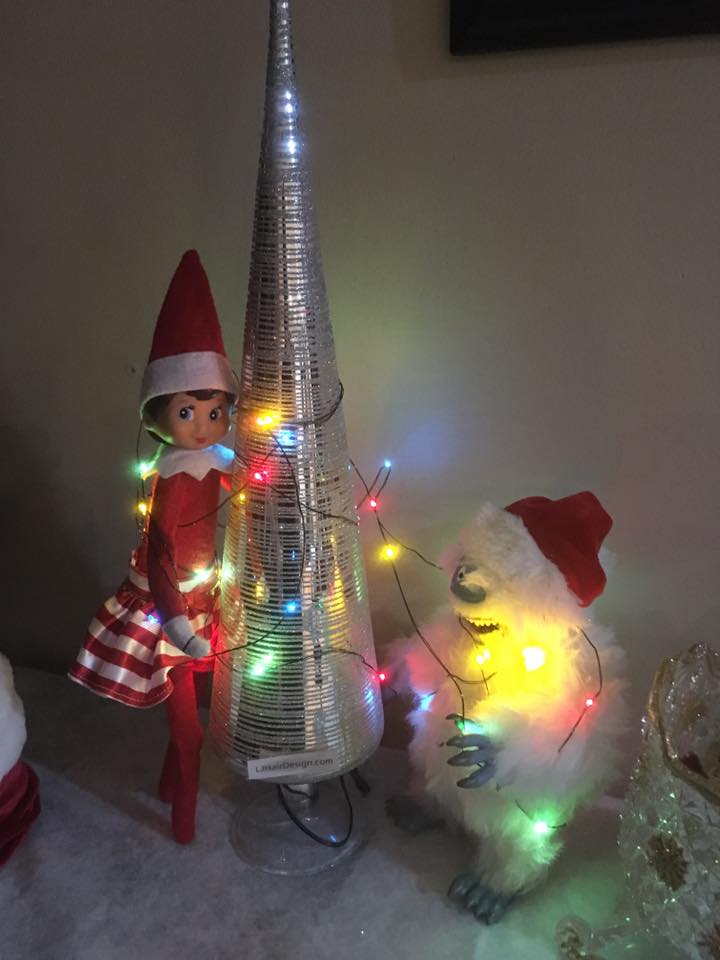 The two friends were happy and ready to work,
A tree had to be decorated each year like clockwork.
These two together, there was always a mess,
Tangled in lights, a problem to address. 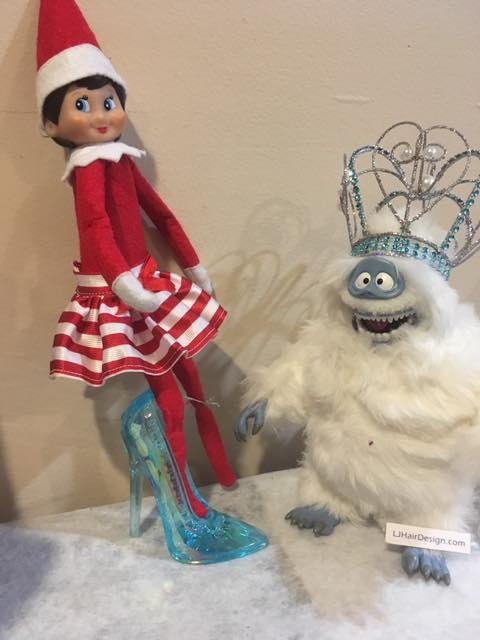 The bell of the ball ready to find her sweet prince!
Philamina arrives with a cry and a wince.
Glass slippers on her foot, like the real Cinderella,
But fit? No, they don’t. Here’s an elf with no fella. 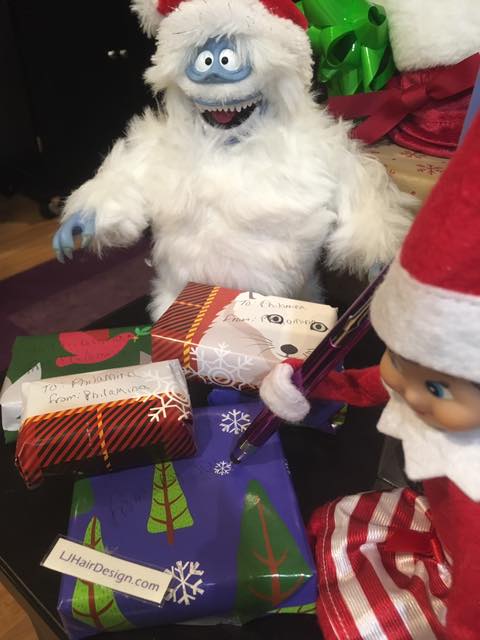 Gifts aplenty! But who are they for?
“For Libby and Bumble” not herself, she swore.
Upon closer look, on the gifts under the tree,
“To Philamina. From Philamina” is what you would see. 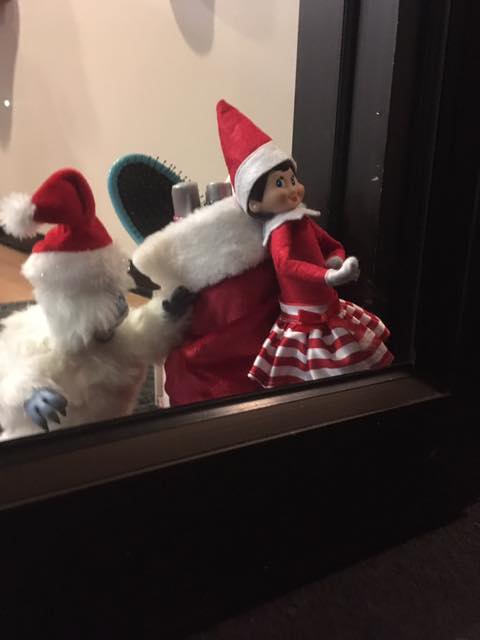 The day had come, the visit is through,
A bag of memories for Philamina, Bumble, and Libby too.
Then Libby heard Philamina exclaim, as she drove out of sight,
“Happy Christmas to all, and to all a good night!”