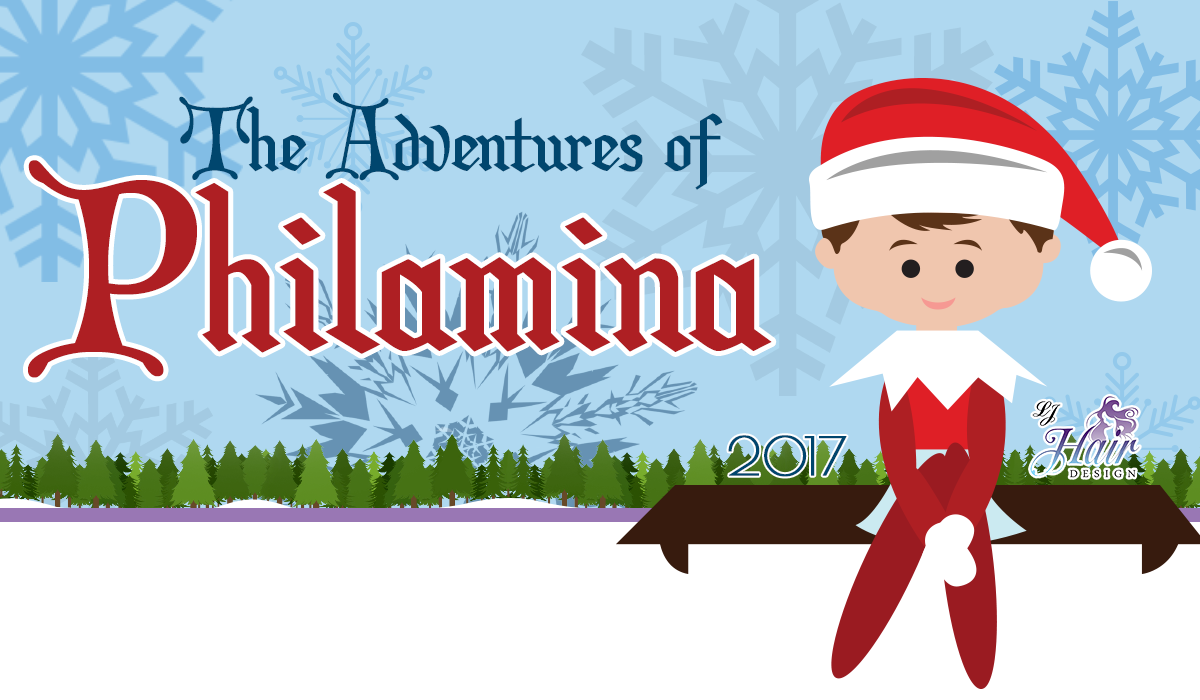 ‘Twas the night before December 1 and all through the salon
Not a salon owner was stirring, for everyone was gone.
The bottles were sitting on the shelf with care,
In hopes that a stylist would soon be there. 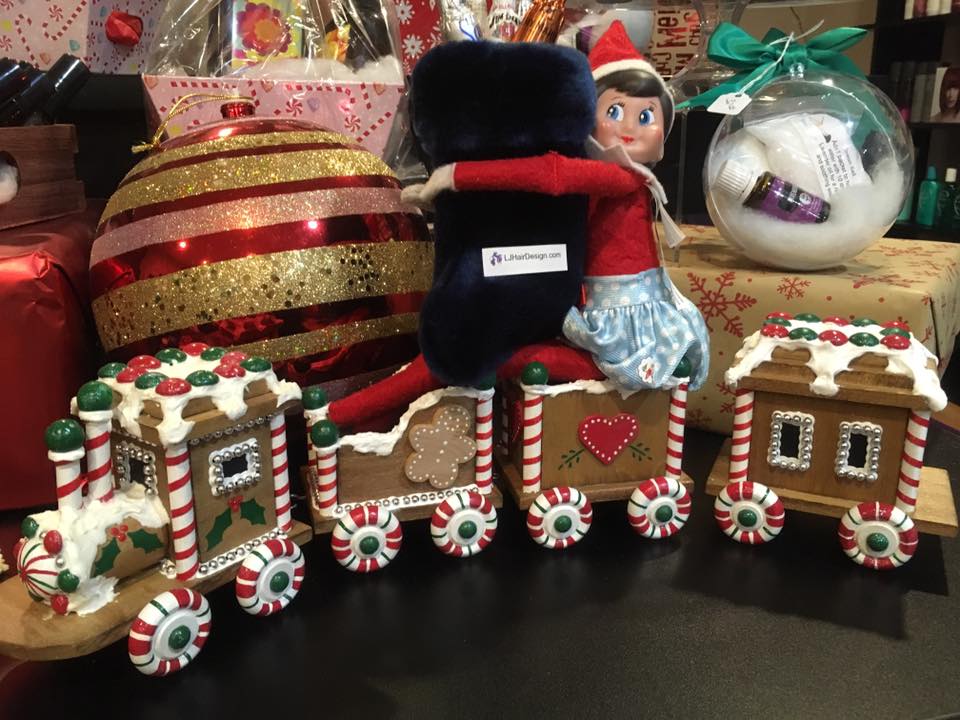 When day had arrived, a sound in the distance,
The smallest train arrived without any resistance.
Packed with her bag and filled with Christmas cheer,
for until the 25th day, Philamina was here. 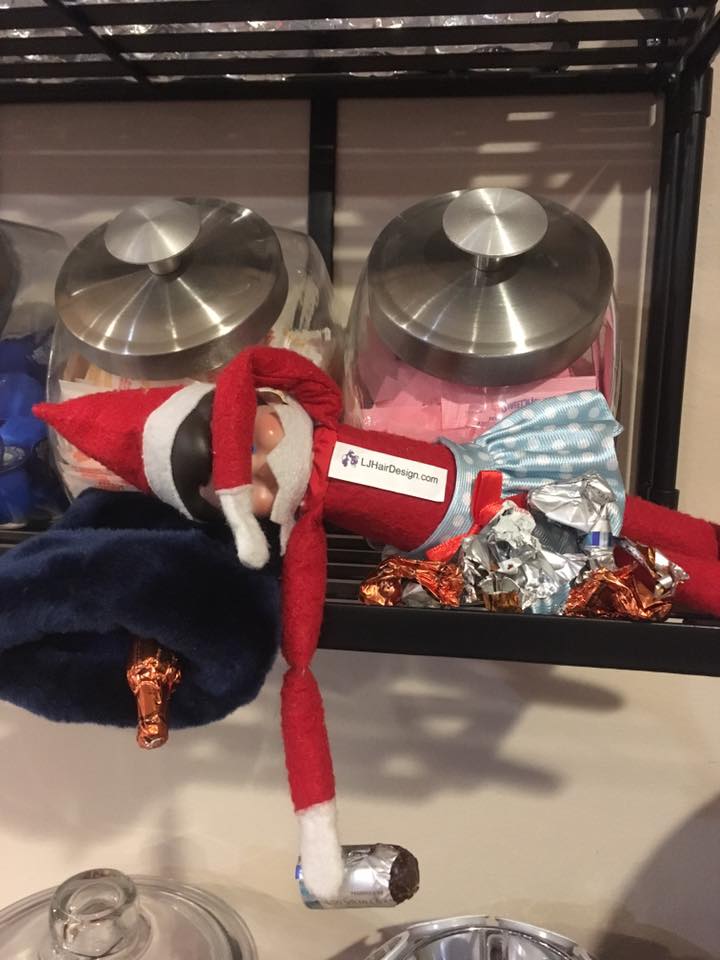 A scent in the air and a glimmer in her eye,
For treats were around and the elf was not shy.
Twas chocolate filled with a mysterious drink,
After a few, Philamina, sick, ran to the sink. 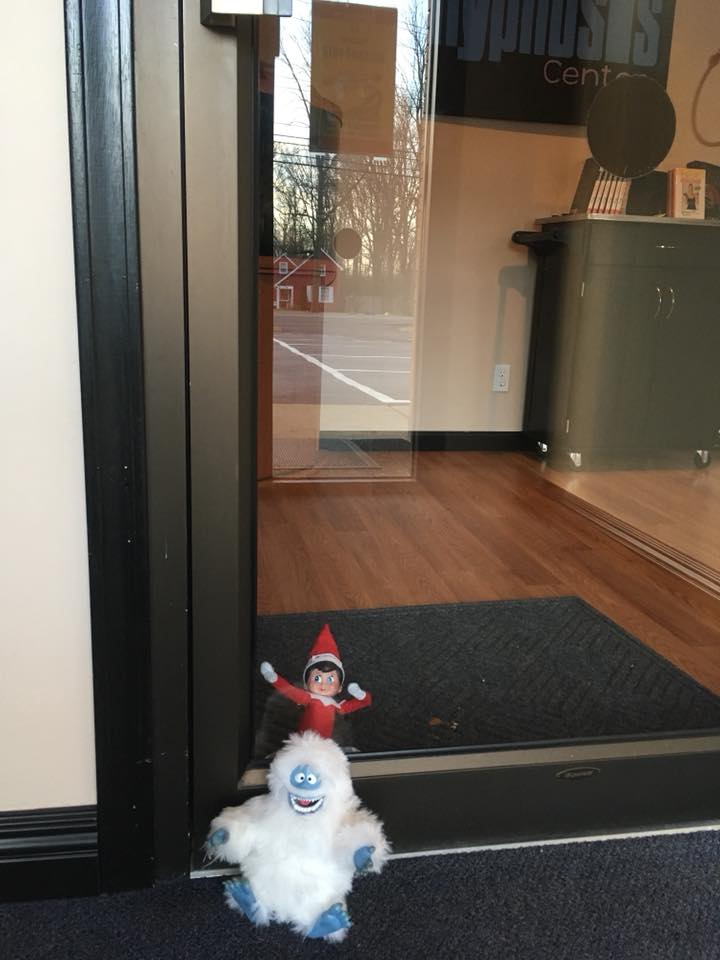 A mysterious door that bid the young elf to enter.
Soon enough, Philamina wondered around the hypnosis center.
And Bumble, full of mischief, looking to mess about,
Locked the elf in and would not let her out. 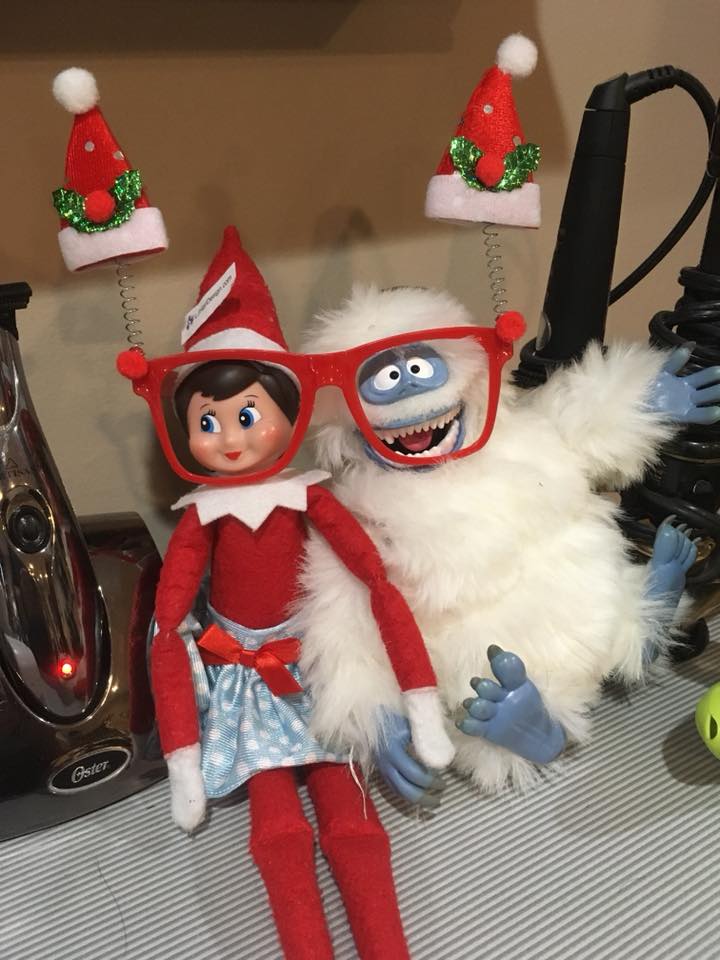 Libby, annoyed, made the two make a truce,
For she would lose her mind with a month full of abuse.
The two now good friends, finding ways to get along,
Shared the same sense of fashion when they put red glasses on. 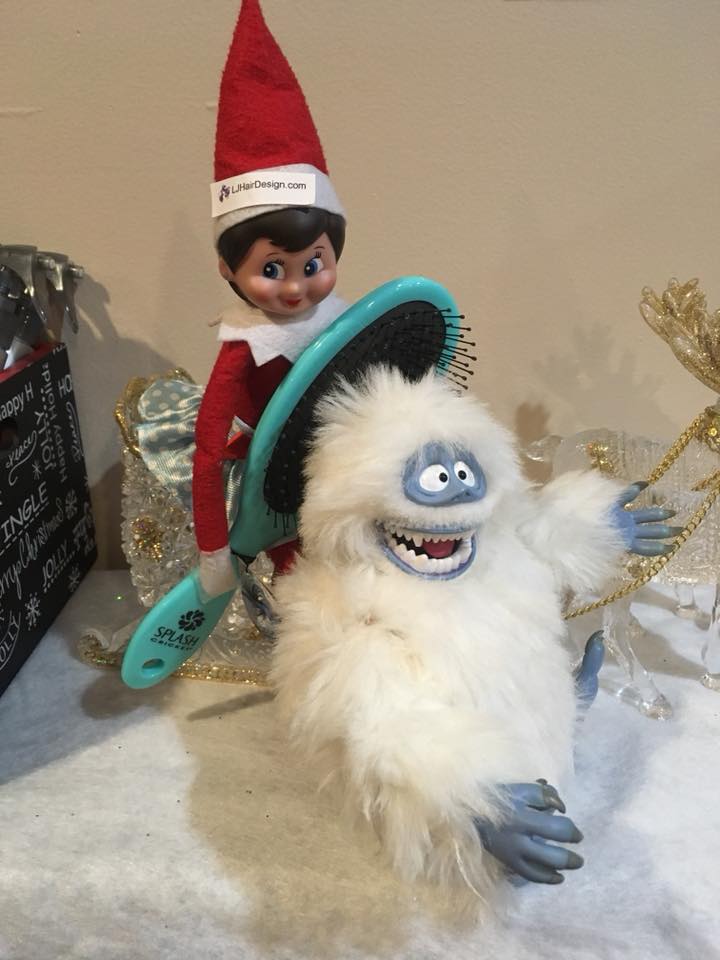 Philamina, tired of the chilly northern air,
Was put to work with a career change to share.
Libby surrendered her comb and her brush,
And Philamina took the day making Bumble’s fur nice and plush. 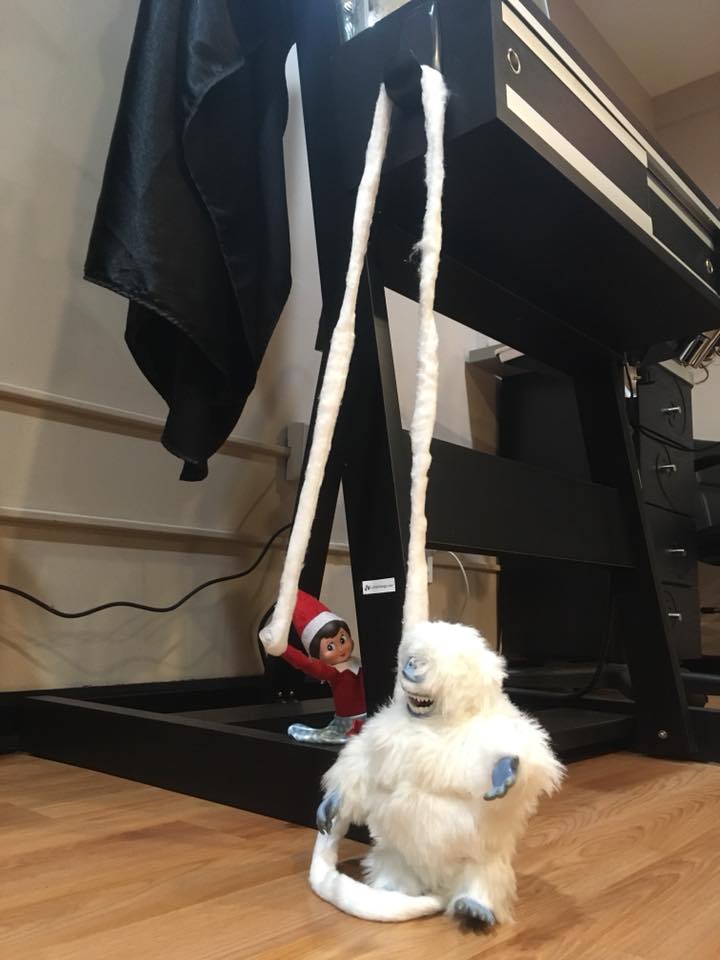 The days were getting shorter and the elf was growing tired,
For if Christmas was to be a success, her plans had to be rewired.
Philamina assembled a plan and went out on a limb,
But what was she going to do if she catches him? 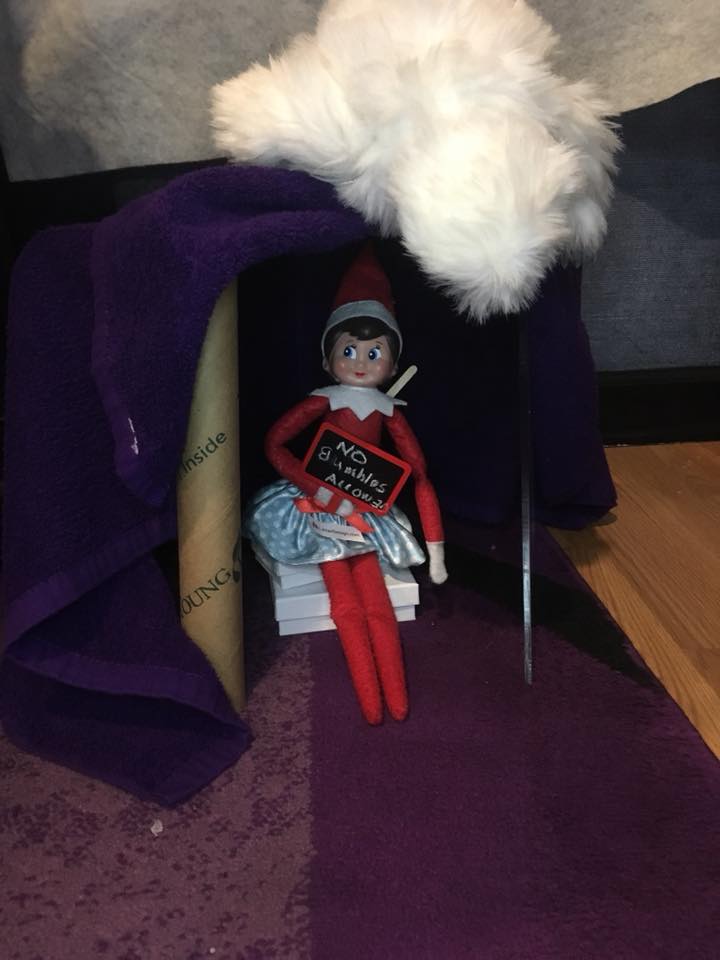 Libby was worried for things were not being nice,
She offered her visitor some friendly advice.
If entrance was denied, Bumbles heart would crack,
and all of Libby’s towels, she would take back. 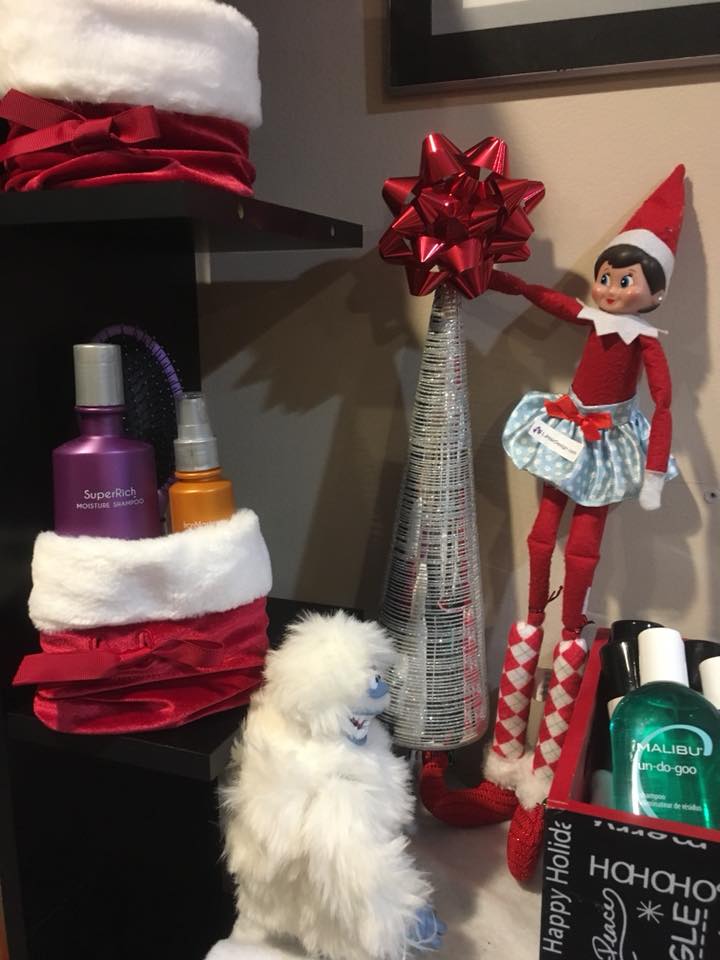 To distract the twosome, Libby put them to work.
A tree had to be decorated each year like clockwork.
But Philamina was too small and the tree needed a star,
So she put on stilts that made her really, really tall. 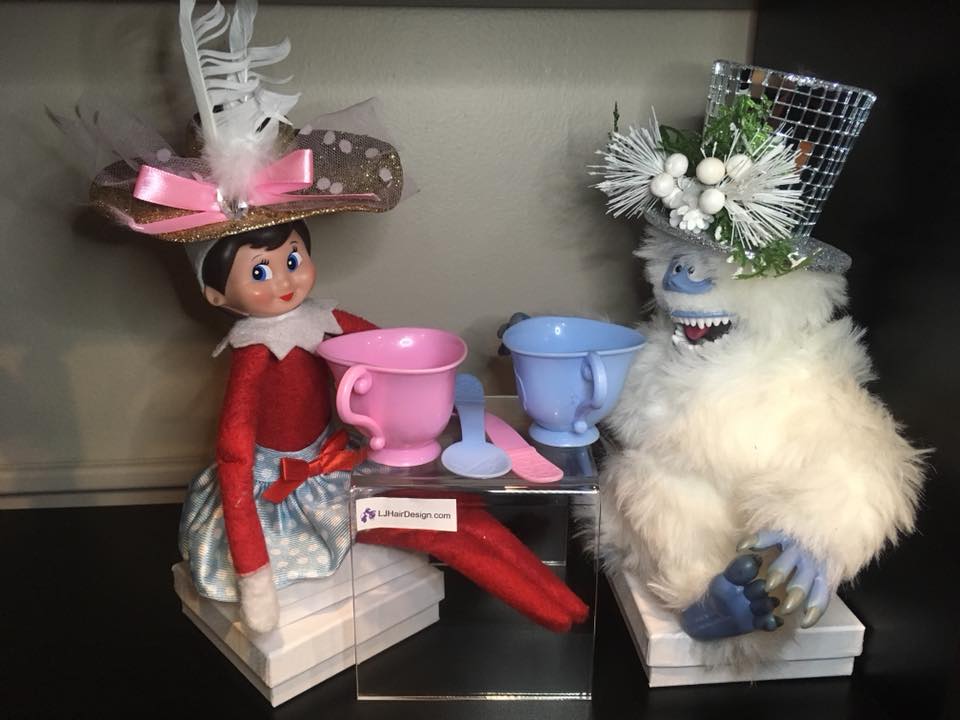 The two stopped their quarrel in time for some tea,
And Libby was happy at this cheery sight to see.
Bumble and Philamina with their little teacups,
And giant hats looking like a pair of grown-ups. 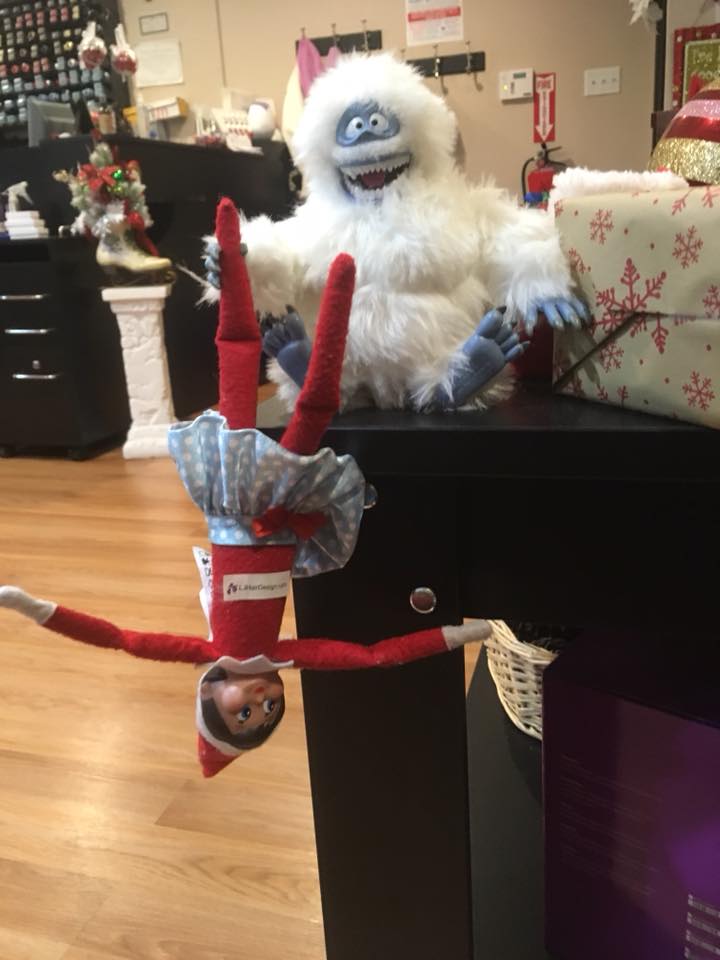 Then something changed and Bumble let out a roar,
The whole salon shook, and Philamina dangled over the floor.
With an elf tied up and Bumble throwing a fit,
whatever it was, Philamina probably deserved it. 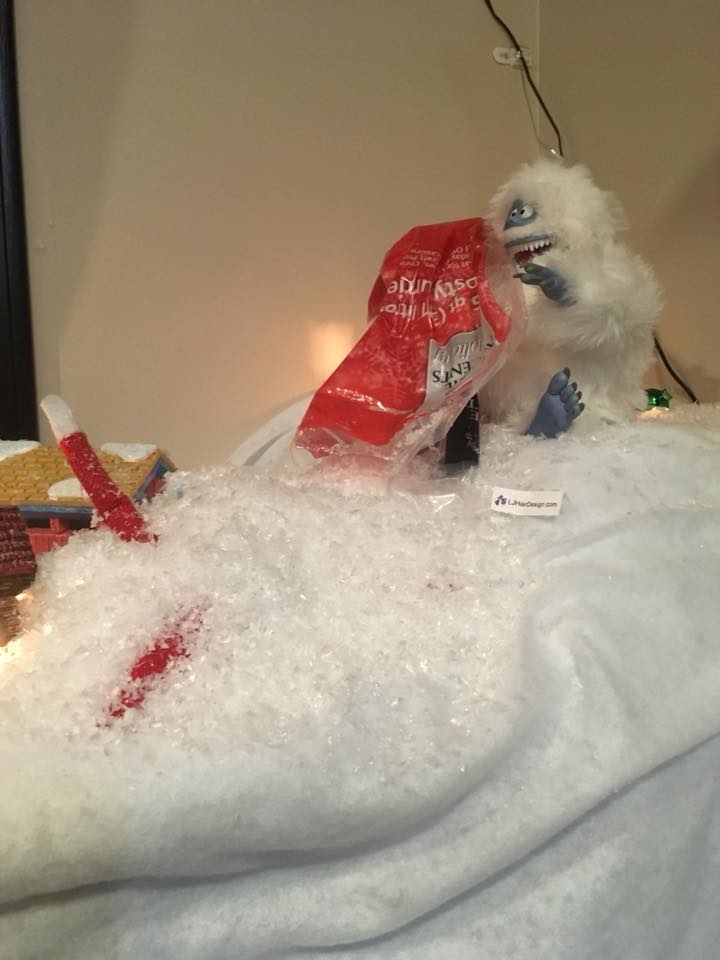 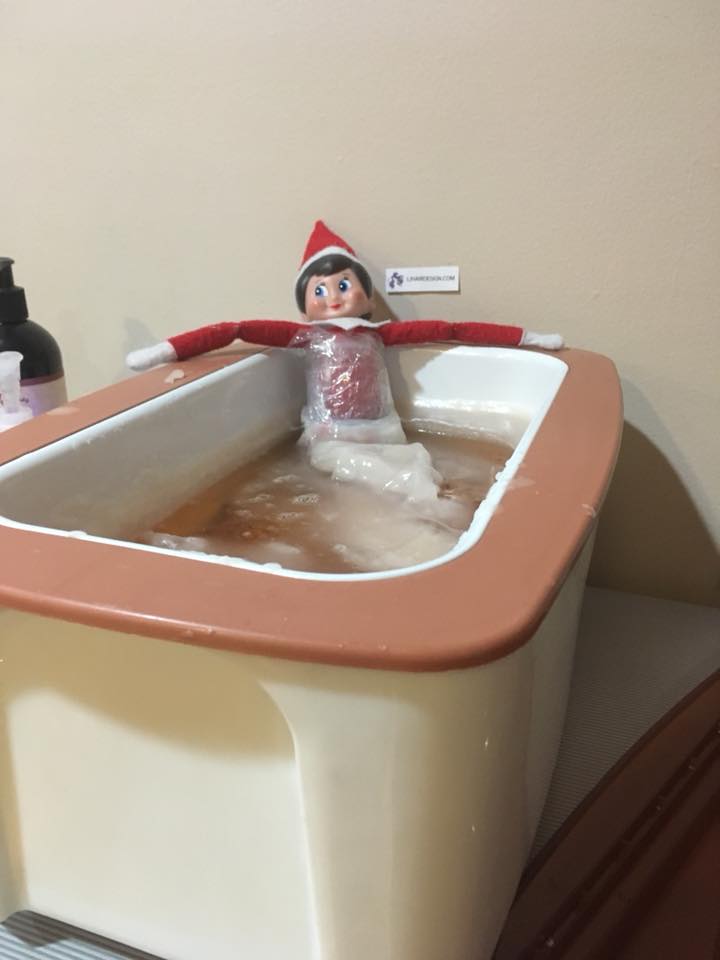 Philamina was frozen, she could not feel her feet.
Had to find some warmth or she would be beat.
A Hottub, how glorious, filled with warm wax,
The elf climbed on in and started to relax. 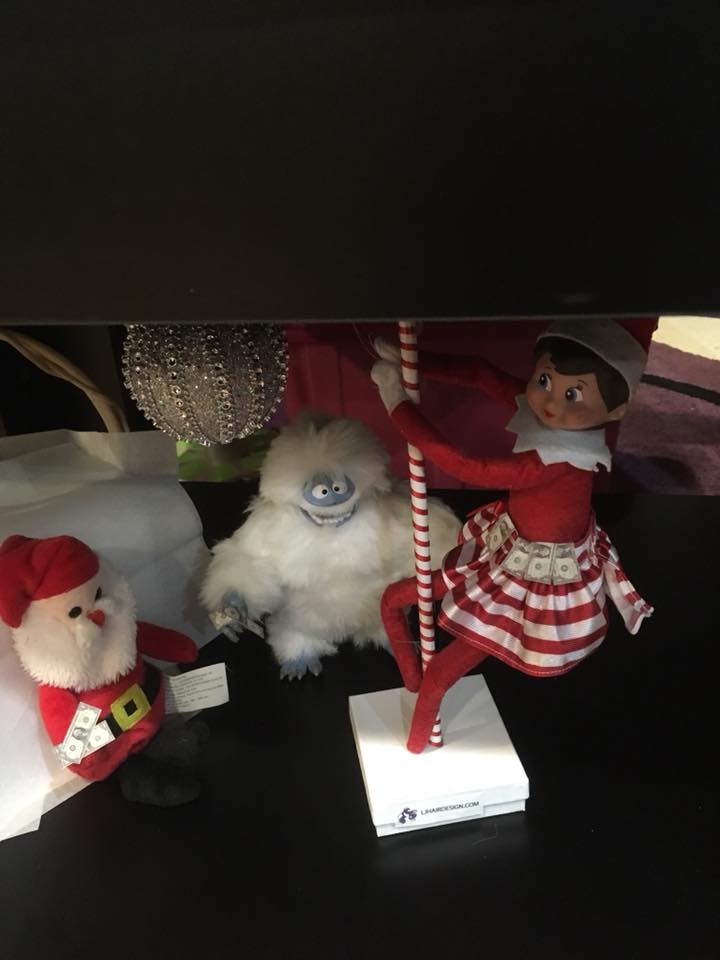 The next day was quiet, but in the night was a clatter,
Libby rose from bed to see what was the matter.
Philamina on the pole with a dance and a shout,
and Santa and Bumble emptying their pockets out. 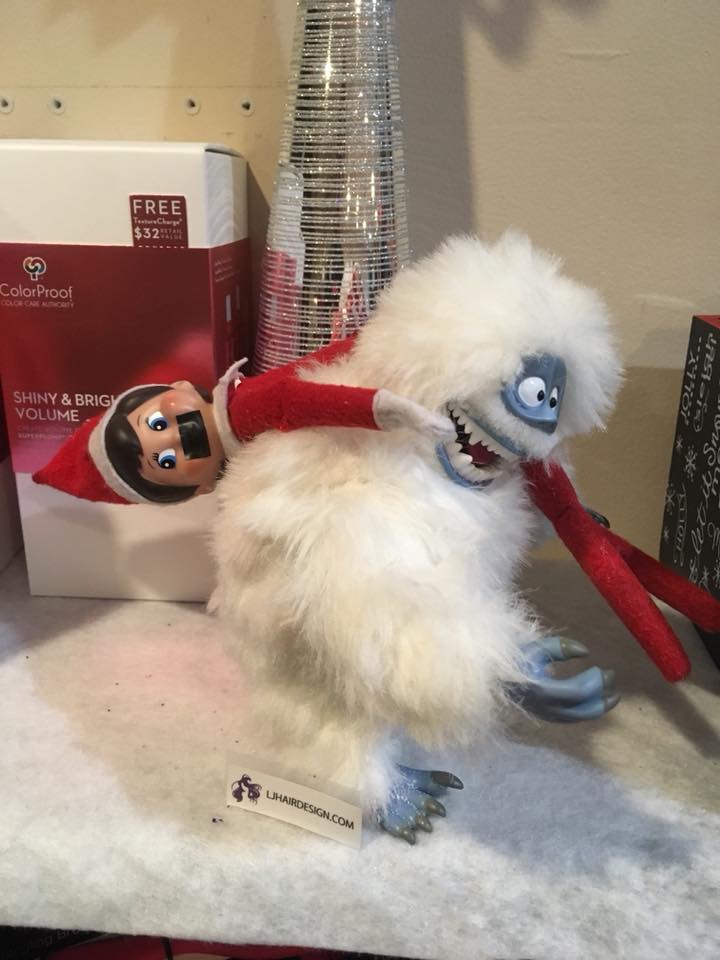 Another day brought more trouble to the shop,
For the month’s disorder needed to stop.
“Kidnapping is illegal,” Libby yelled as she rolled her eyes,
Then Bumble used duct tape to mask the elf’s cries. 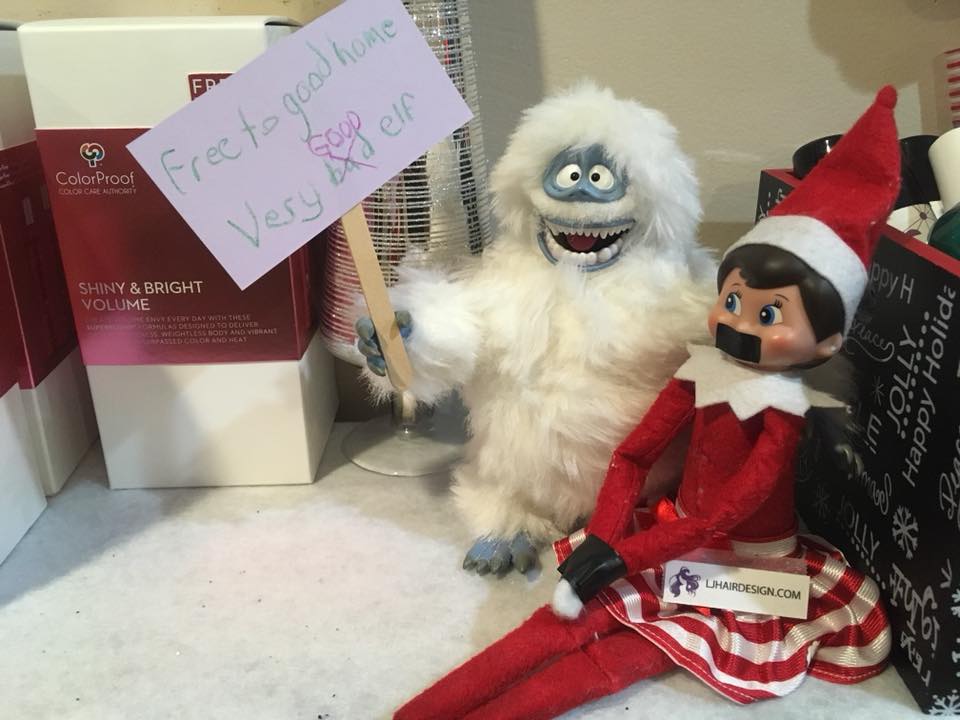 “Free to a good home. A very bad elf.”
A sign for Philamina, tied up by herself.
You can not give or trade or sell her away,
Libby cried until the break of day, 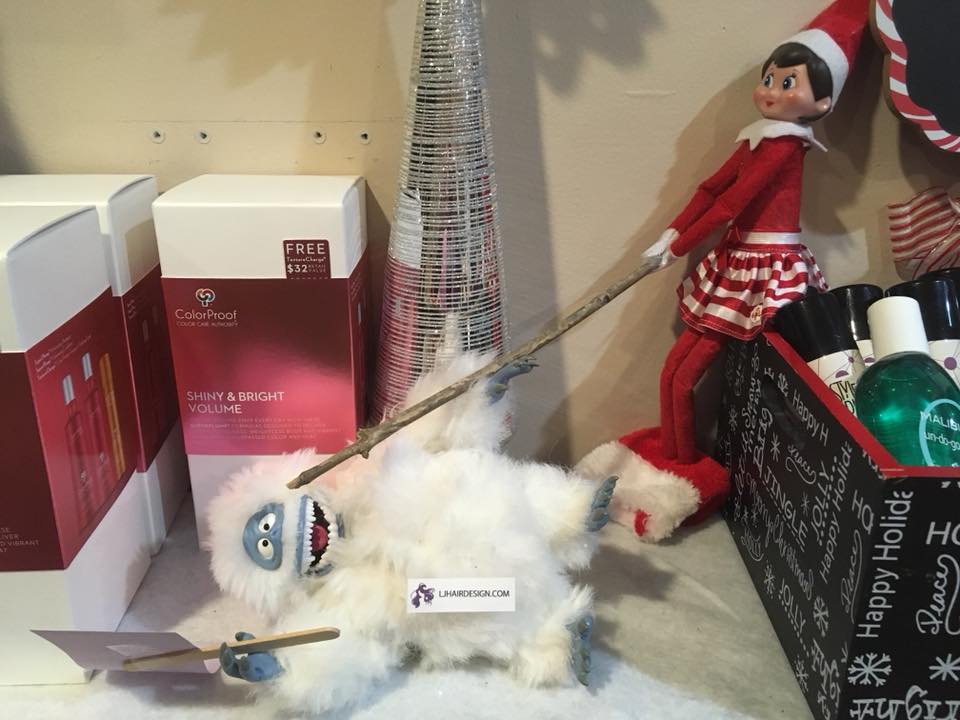 Revenge was in the air, it was time for payback,
With a stick and a push, the elf gave a big wack,
Philamina was free but what was the cost?
For her friendship with Bumble was surely lost. 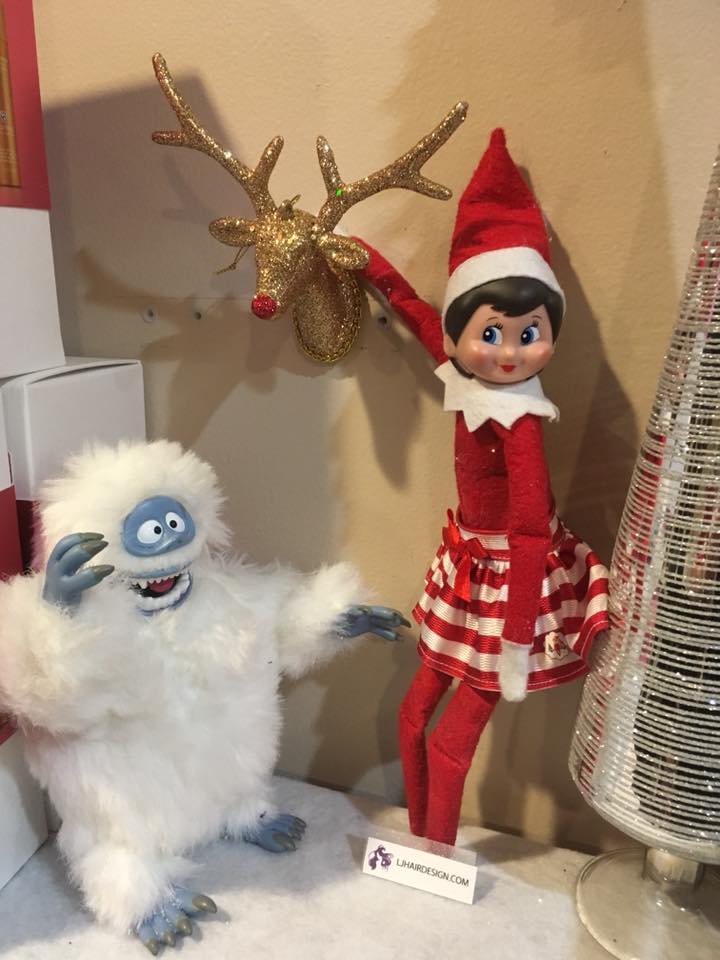 But a miracle happened, something Libby could not foresee,
And the two started decorating, their eyes filled with glee.
With smiles and decor though tacky and strange,
Bumble and Philamina got along, which was a good change. 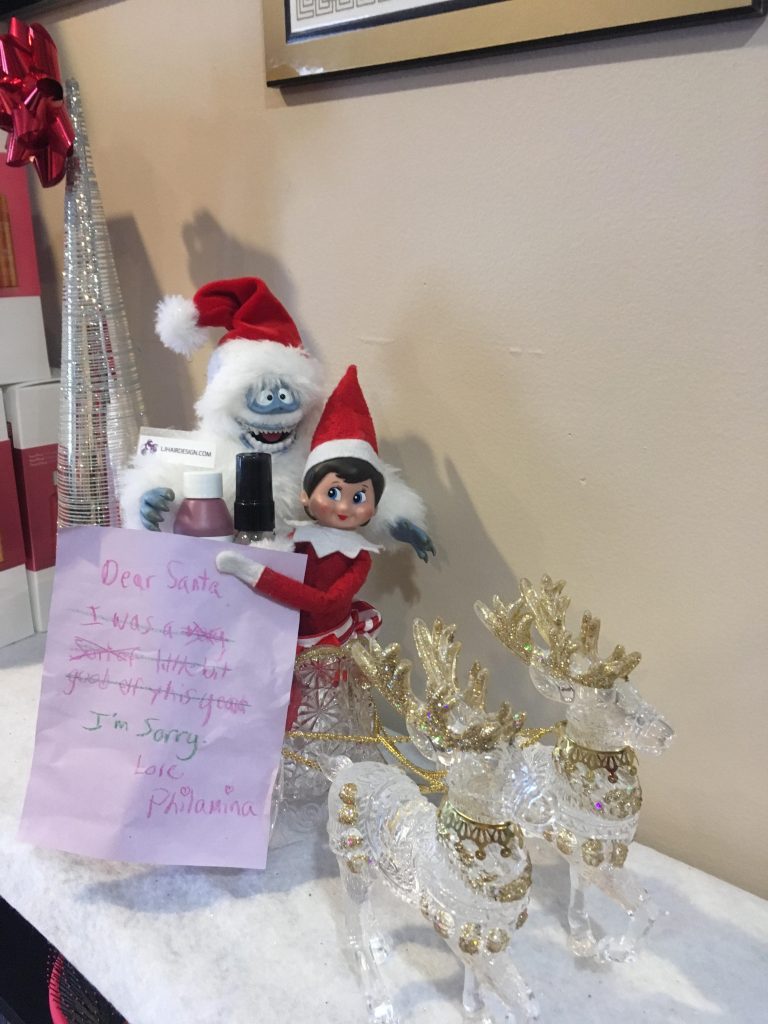 The day had come after a month of madness,
Though Libby couldn’t help but feel a twinge of sadness.
But Libby heard Philamina exclaim, as she drove out of sight,
“Happy Christmas to all, and to all a good night!”

How To Maintain Long Hair

Hair Prep: What To Do Before An Updo